On the night of the full moon, February 26, 1975, my friends Bruce, Victor, and I climbed to the top of the dormant cone of the live Guatemalan volcano, Pacaya. We reached the edge of the jungle trail leading to the cinder cones about 10:00pm. Climbing up the cones involved stepping into deep ash and sharp edged volcanic rock. We first climbed to a rock outcrop level with the live cone. You could look around the edge directly at it. From there, we climbed the rest of the way to the dormant cone, looking down on the live cone across a small depression separating the two cones.

It was an amazing night. The mountain would shake and shudder, then from the live cone a column of pyroclasts would blast into the night sky, followed by lava sloshing over the edge. It was like a million red hot jewels blown into the night sky every several minutes. We stayed until dawn.

When the first light of dawn arrived, the dawn began to color the eastern horizon. The stars in the night sky still showed, and we realized the colors of the volcanoes smokes and fumes. It was the most amazingly beautiful site I had ever seen. It was alive, beautiful, and so powerful.

As the sky brightened, we could no longer see the stars, and the ruby red eruptions were washed out by the sun’s light. We gathered ourselves and headed back down the cinder cone to the jungle trail below. Stepping down into the deep ash of the cone, I found that by pumping my legs a wave of ash built under my feet that carried me down like sliding down an escalator.

My friend Bruce visited Pacaya again a few years later. He said that the mountain had changed completely. The dormant cinder cone, where we had spent that night, no longer existed. Pacaya had blown it right off. 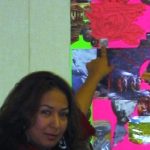